Bring your favorite Star Wars scene to life by building the LEGO Resistance A-Wing Starfighter 75248 set. It has been well-crafted to look like the actual Starfighter. Adorn it with our LEGO Lights while you reenact epic space battles. A very captivating piece to display, all the beauty and splendor of a Lego model in your apartment. Light is equally important in this masterpiece, for making the difference in this piece when there were no lights. The frontal of this masterpiece is so astonishing, its captures all the essence of adventure. To properly defend the galaxies it is best to have the best firearms, and this spacecraft is already capable. Off to the Cosmos

This spacecraft is ready for flight. Take a look at the glorious rocket blasters. Your pilot is very happy to start riding across the stars, look at his pretty smile ready for the next thrilling adventure. 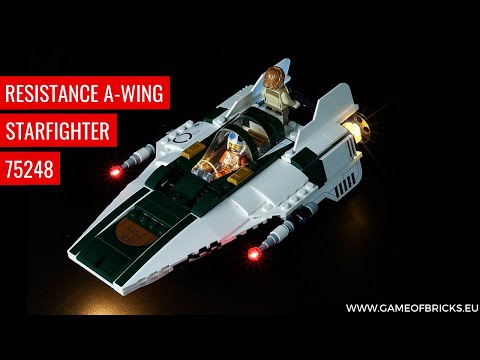 This advanced LEGO Resistance A-Wing Starfighter 75248 kit features several outstanding and authentic details, such as retractable landing gear and two firing missiles. The model also has various LEGO action figures, including Lieutenant Connix and Snap Wexley mini-figures, and each of them has a weapon to bring the action to life. There is also an opening cockpit, spring-loaded shooters, and wingtip cannons. Join in the thrilling space battles by building the LEGO Resistance A-Wing Starfighter 75248 set. You can make the scenes more fascinating with our LEGO LED Lights.