Pay a visit to Harry Potter's wizarding world by building the LEGO Hogwarts Icons - Collectors' Edition 76391 set. Its authentic details make the set a treasurable possession. Make your imaginative play come to life by customizing this set with our ever-brilliant LEGO Lights.

Hoot At the Top

The mystery of the magical is personified by the commanding presence of the wise old owl, Each call evoking the depths and secrets of magic

One-Stop for the Magical

Centuries of training of the world’s best magicians have turned Hogwarts into a fantastical institution in a class of its own.

The thousands of leaves of thousands of books embracing the many spells and incantations that make the best magicians in the world.

A letter of admission, a formal seal of acceptance and you are on your way to becoming the greatest spell caster in a hundred years.

Beyond the wand and book of spells, nothing makes for compelling magic that trusty old portions that make and unmake at will.

There is no better place to get all you require to become the best magician you can be. Hogwarts has everything you need. 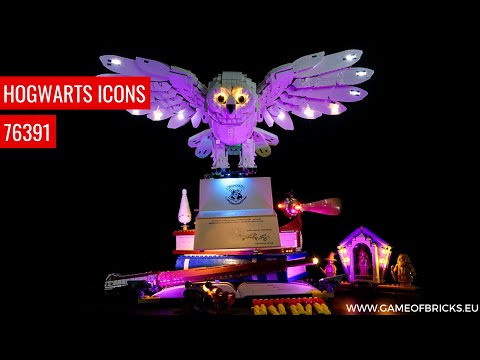 This LEGO Hogwarts Icons - Collectors' Edition 76391 set comes with about 3,010 pieces. It features several realistic details, such as were shown in the Harry Potter film. On this set, you will see Ron's chocolate frog, Golden Snitch, Harry's wand and glasses, Hermione's potion tray that contains five bottles of magical ingredients and potions (which include Polyjuice, Gillyweed, and Felix Felicis), a school scarf (which can be customized to fit any Hogwarts House), and Tom Riddle’s diary. Give this set to any LEGO or Harry Potter fan on his/her birthday or during Christmas. Bring the magical world to life by building the LEGO Hogwarts Icons - Collectors' Edition 76391 set. Make the scenarios more fascinating with our LEGO LED Lights.