AN ADVENTURE IN SPACE

Embark on an intriguing outer space mission by building and playing with the LEGO 10231 Shuttle Expedition set. This model comes with authentic details and realistic features to make your building task more enjoyable and rewarding. Install our LEGO Lights around this fantastic toy and bring it to life. This is a perfect replica of a shuttle that has all the necessary items for an expedition. Truly remarkable. The design of this masterpiece can shoot to the stars, it is absolutely stunning and beautifully crafted. Build your Lego set and improve your building skills. Beautiful memories can be made. Gift from the universe

This model has amazing characteristics of being that perfect gift for anyone both young and old. Showing an interesting perspective on blasters, the highlights of the blasters give it a realistic look. Show everyone about your interest in outer space and space shuttles. Make an incredible display of this piece. 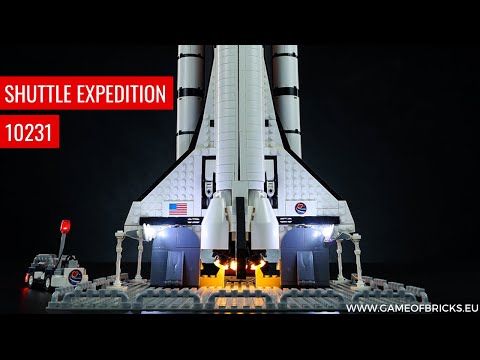 This realistic and detailed LEGO 10231 Shuttle Expedition space shuttle is set to count down and launch on its next thrilling voyage into space, standing tall from wing tip to wing tip. You may launch from the launch pad, remove the booster rockets and detachable fuel tank, and then deploy the satellite with its unfolding antenna and solar panels. Realistic engines, retractable landing gear, an opening cockpit with space for two astronauts, an opening cargo compartment with a crane that can lift a satellite, and a ground support vehicle are all included in the shuttle model. Contains 3 minifigures: a man and female astronaut and a member of the service crew. The space awaits you. Make the journey more memorable by building the LEGO 10231 Shuttle Expedition set. Make it glow with our fascinating LEGO LED Lights.