Mount Huaguo or Flower Fruit Mountain is a location that's key from the classic Chinese novel journey to the west. There we have the Monkey King, who is the main character. Withinthis Mountain range, we can notice the Shulian Cave. The entrance is entirely hidden behind natural waterfalls.

Many events are significant in the story that occurs in the mountains and the cave. These are what this model depicts.

This is not like other sets from the Monkie Kid range. Here we have little things to do with the story. These things include stuff that gathers inspiration from it. 80024 The LegendaryFlower Fruit Mountain tries its best to bring the book to life. 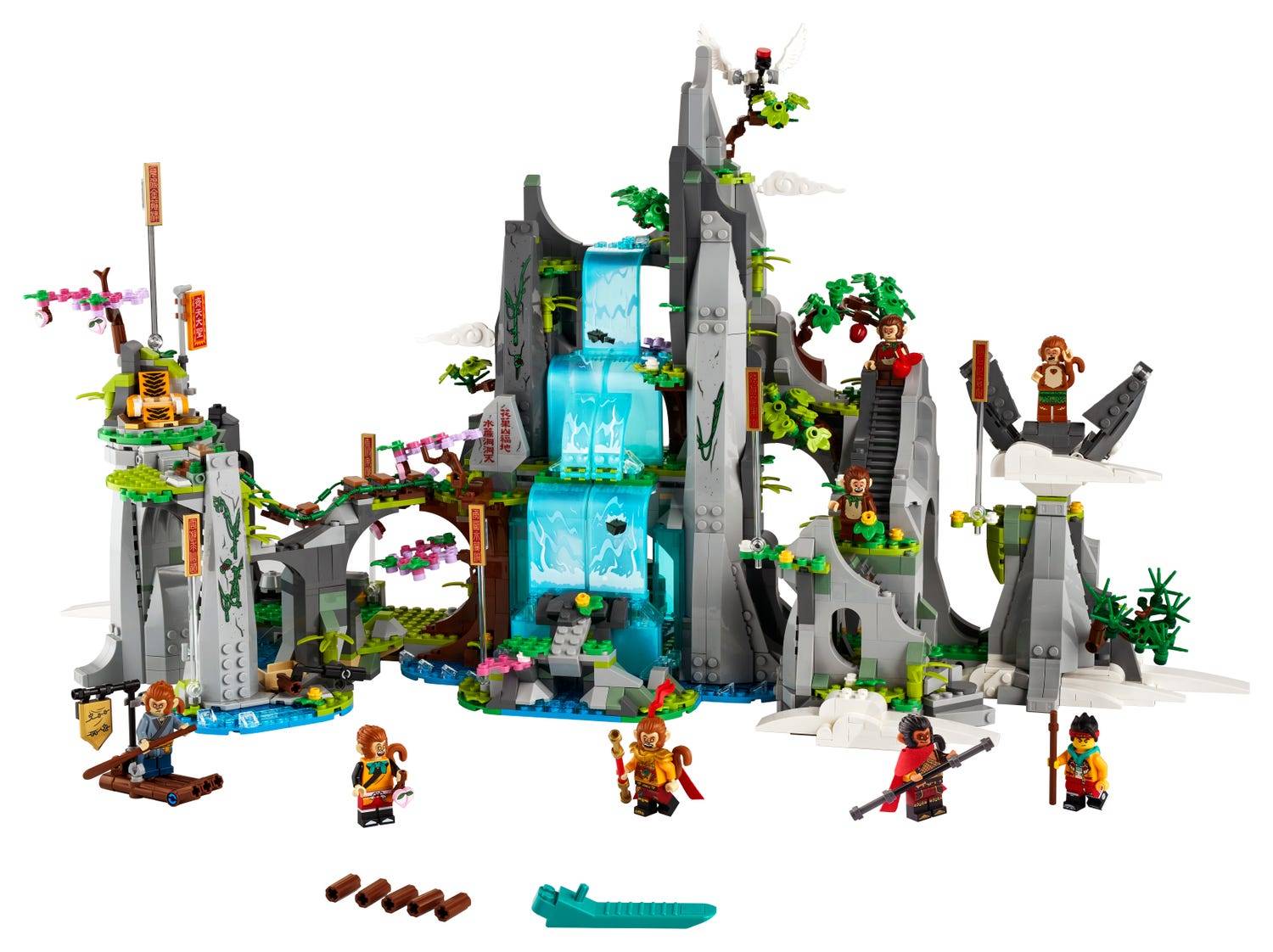 I would try to keep this review as brief as I possibly can. I'm tired and stressed. Just bear with me, please.

So we have the journey to the west. This book is based on the true-life journey of a monk from the 7th century. They are considered to be one of the four classics from the literatureof Chinese. These are not adequately well known, though. However, you would like to find out some more on this topic. You could learn from the Wikipedia article. I enjoyed reading that.

Most of the phases on this flower fruit mountain are not in English. So the translations are not exact meanings. But they try, though.

You know, in every language, you can never quite translate it according to the actual meaning.

Even people that know how to speak more than two languages would tell you that this sentence and that sentence have the same basic meaning, but the words, they don't quite explain eachother perfectly. I don't know if you properly understand me.

The mini-figure choices are not short of remarkable. There are about six new figures for the new ones that just became updated. Let’s look at some of them.

This Lego set has about four different versions of the Sun Wukong. These depict him at various stages of the story.

The youngest of these is him looking like a baby. It is quite surprising that regular-sized legs are what he has. His siblings do not. This could have been made like this to allow theleafy loincloth to get printed on him with ease. 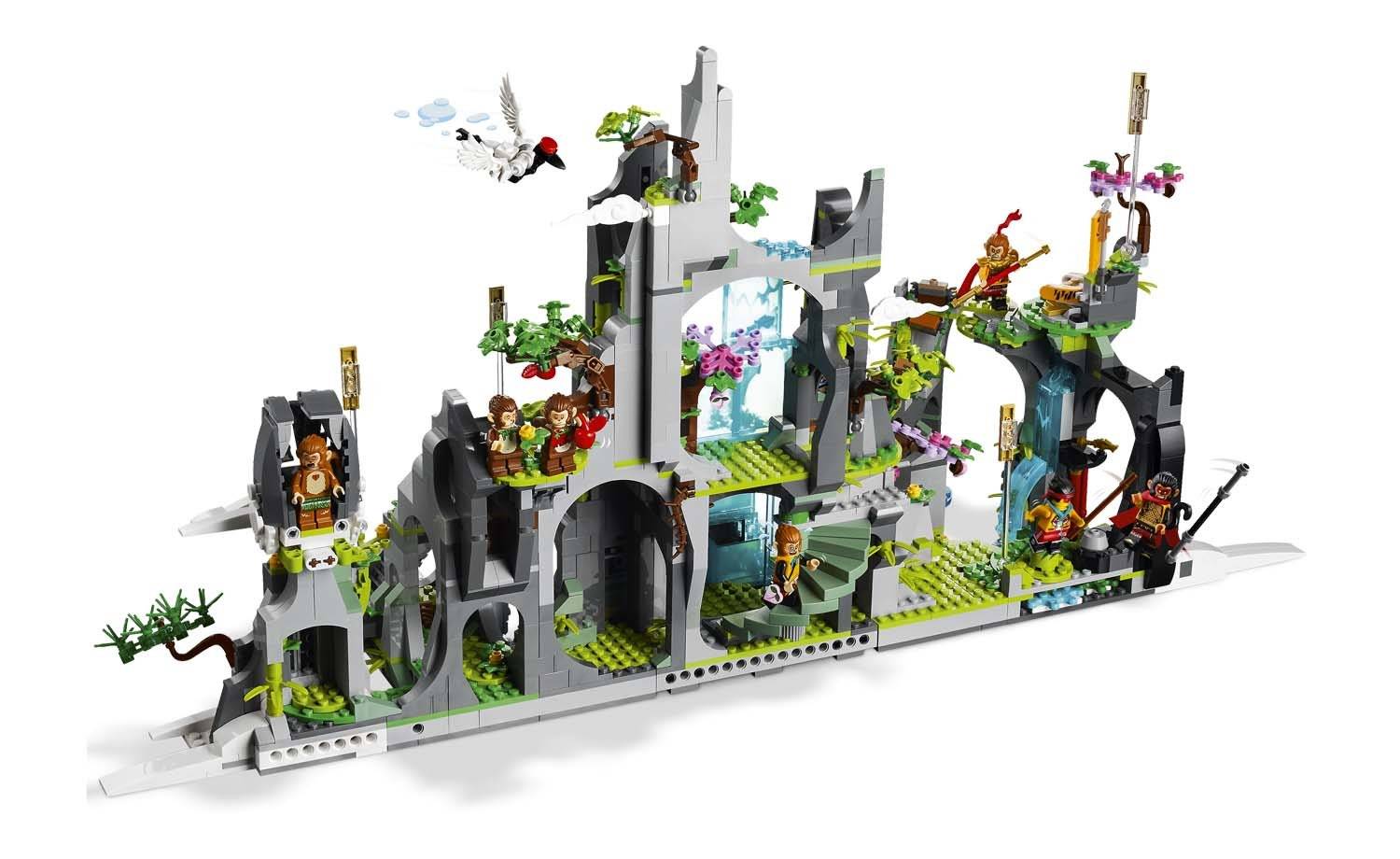 There's a brand new flat tail element that is being produced for the lovely monkeys. From last year's Lego sets, the monkey king had like a cat tail that protrudes at right anglesto be back.

This fabulous pair plays on the mountain. They eat fruit and flowers. They state the same ear and hairpiece from the mini figure above. This is around the first time it appears in regularbrown color.

The sister covers her modesty using a bright red cloth. This dress continues to the rear end part around the torso.

This pair is fitted with the cattail. This was first used by scratchy from the Simpsons mini-figure.

They depict the sun at several various stages of the story. They are an apprentice and a king. Both of these features are printed intricately, and they both have beautiful legs and torsos.Presently there's the thin front face of the tailpiece, which has been painted orange. This matches the color of his waist.

I would not attempt to try and explain their expressions. Honestly, these are not so attractive. They are not endearing too. 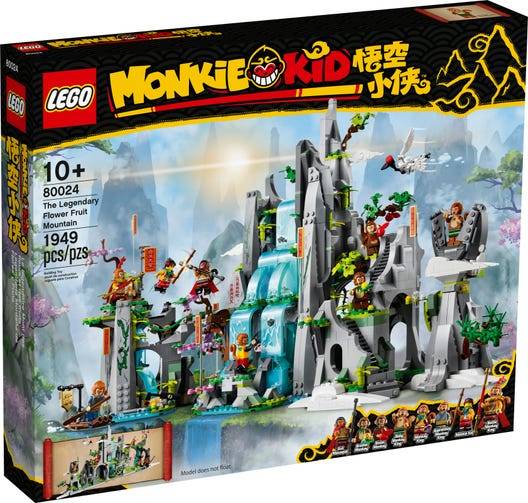 The latest version of the sun is the king in his attire for battle. Printing-wise, this is quite identical to the version from last year. This one has a new style for his tail, though.

The Evil Macaque is entirely known as being the fake Sun Wukong. He’s like the bad guy of the story. He is also said to be as powerful as the sun. His name is the Six Eared Macaque.There should be about four missing Minifigures which are interpreted here.

The dark ear or hair part and black tail are unique to him.

The other expression looks quite fierce. He has robes which have about two pieces of clothes that are arranged beautifully around his neck. They look lovely from behind. They also lookbulky from the front part.

At last, we have the Monkie Kid. Honestly, he seems a little bit extra, especially when he doesn't want to feature in the original story.

This version of him now has a head print and a torso. He also ditched the headphones which were found around his neck. They later got replaced using a hood.

I do not want to dwell in construction because this review is not brief anymore at this point. The parts are divided into about eighteen numbered bags. These bags have instructions allacross three books. This enables the three sections of the models to get built concurrently if you would like to share the fun.

Some stickers would remain transparent. They aid in the provision of decoration for waterfalls and mountain faces. Also, there is the Chinese text for signs which are all in dots throughoutthis model.

The model after you’re done completing it

When you properly look at the instructions, the designer reveals that Chinese traditional landscape paintings inspire this design. These aim to capture the essence of scenes rather thanproviding realistic or life-like impressions of them.

There tries to be a serene place. You can enjoy sheer rock vegetation and faces which are very high in the sky. You can see a tall waterfall that dominates the Vista, also covering theShuilian Cave entrance.

There are about six scenes from the story which are depicted in line with the model. There is quite odd because the text in Chinese is usually written from left to right. Red bannerssee you could get scattered all through the model. They explain their essence too. 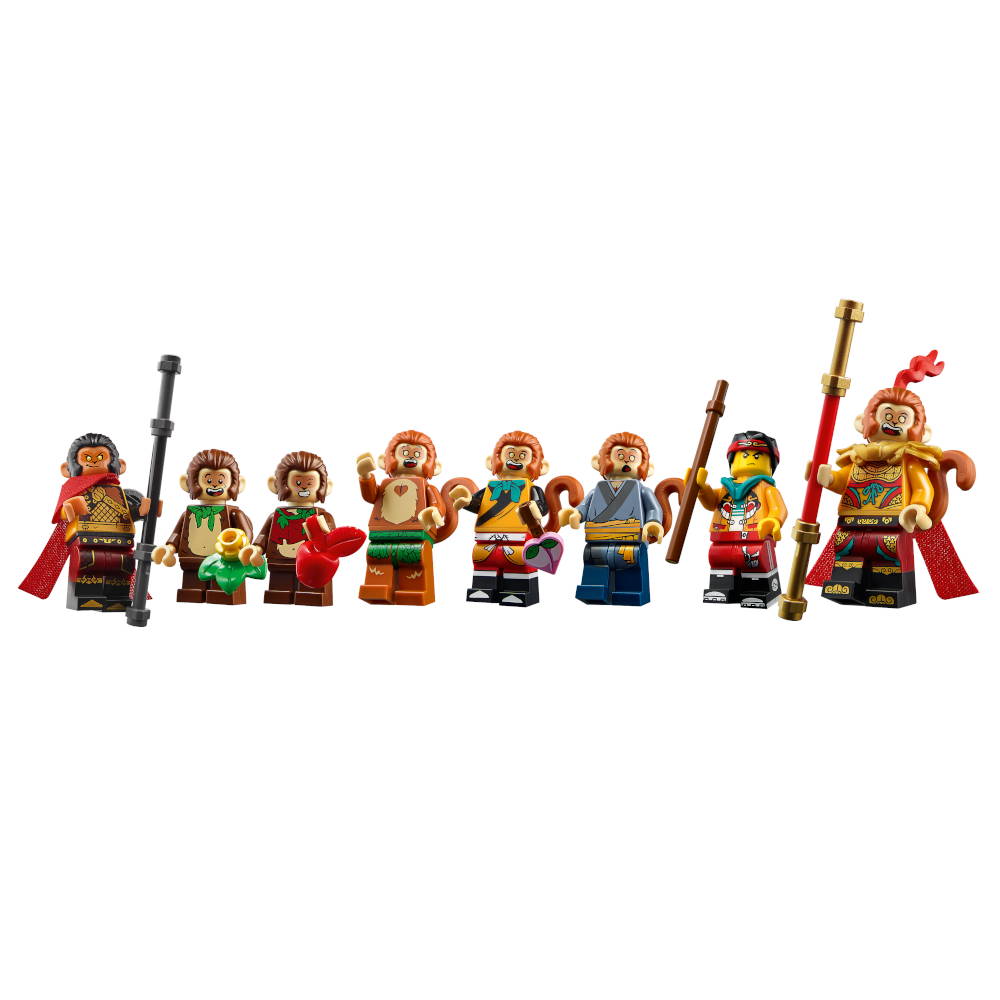 It is a model that has lots of bright greens. It is vibrant, has blue water and pink foliage. This is not a thing you can say about several Lego sets.

The Monkey King story starts with Sun Wukong being born from a magic stone that rests until a mountain created with Fruit and Flowers. The stone got a magical womb that popped to givebirth to a stone egg that's like the size of a ball.

When the wind blows the egg, it turned into a stone monkey that could already walk and crawl.

The magic stone sits on top of the right-hand side. It is quite hollow, which allows the infant sun mini-figure to get placed inside it.

Making use of a simple technique at the back would make the stone open up. Doing this would show you the new baby.

The first of the six banners read, "Released from the rock."

The remaining part of the right-hand shows what one could presume to be another different scene from the story. Here the sun and his younger siblings are having fun. They are eatingflowers and fruit. The banner in this area reads Playing on Flower Fruit Mountain”.

The stairs here are made, making use of lots of 1x2 plates. These were designed originally to be used as train steps. These are mounted at angles. They are practical and straightforward.

Moving to the model center, one of the crucial chapters from the book gets released.

Here is the part where the sun rushes using bravery through the waterfall and hides in a cave. That’s where he became crowned the monkey king. Cute right?

To ensure that these are acted out correctly, the center's rock can get pressed down properly. Here the banner tells you that "Charges into the Water Curtain."

There’s also the shimmering light which is transparent. They have some stickers on them. They are quite good to apply them. They also look great on their own.

A crane, a bird, perhaps is around a tree on top of the mountain. We don't know why it is there. It is appropriately designed, though. It uses a Droid arm to create an elegant andslender neck.

In the end, the makers of this Lego set did a great job. Most of the things organized and attached to this Lego set were made using a lot of details. It wasn't created anyhow. Itwas not made in a rush like some other very sad Lego sets out there. So kudos to the creator, the designer, and the entire crew. Hope to review more next time. Till then, there's more to come as usual.